To mark the change in status of the Massilly aeromodelling club (France, Burgondy), which from a part of the "Foyer Rural de Massilly", becomes in 2022 an independent association called "Aéro Massilly 71", I have chosen to build a new FMS PA-18 and to apply a dedicated paint scheme.

Indeed, this quite small club, which had 18 members at the start of 2022, is really fan of this model. No less than 11 copies were listed at the end of 2021! And the  majority have received personalized decor. I can say that I had given the "virus" with my OO-BTB PA-18 (which has since passed into the fleet of a friend of the club, who love flying it), by giving the sticks to many buddies.

January 1, 2022 therefore sees the official launch of Aéro Massilly 71, an association declared in the prefecture of Saône et Loire (Mâcon) at the end of 2021. A logo was created by MayLee, graphic designer-illustrator and daughter of the club's treasurer. In this logo, the silhouette of the PA-18 has been inserted, as the aircraft is popular within the club at the time of the inauguration of its new status.

So I wanted to assemble the club's twelfth PA-18 and to offer it a "commemorative" decoration, with of course the logo clearly visible. 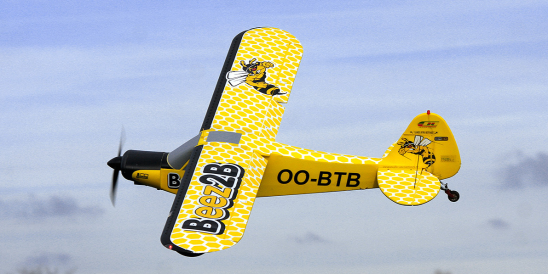 A full review (only in french) of the FMS 1700mm PA-18 is available in the test section (Essais). Click here for a direct access.

The making of of another paint scheme (OO-BTB) for the same PA-18 FMS base is also available in the "Pimp my Plane" section. Click here for direct access. 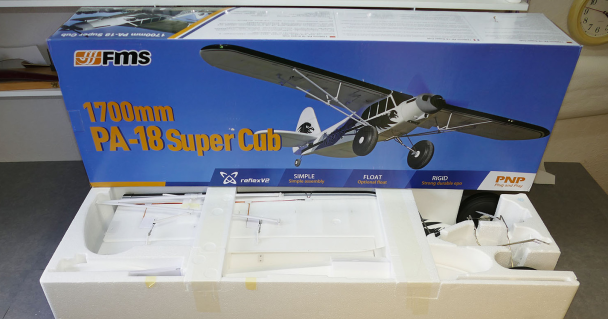 On the left and behind, the FMS PA-18 kit unboxed.

For this copy, I chose to keep it simple. Unlike the OO-BTB, I will not modify the main landing gear or the tail wheel, no additions of struts, or additional lighting. This PA-18 will be "light", easy to fly, made just for fun!

So I ordered a new kit, which compared to that of the OO-BTB has as standard the float set (that could be useful…) and also the stabilization module Reflex 2. I knew the first version of the Reflex which I have in several FMS planes, I am discovering version 2 here. Note that my first FMS PA-18 did not have a stabilization module, but that I had a receiver with built-in gyros, which gived the same result.

The kit arrived very quickly and the first job was to get rid of its original decor, which is easy since it is made of stickers.

The entire airframe was cleaned and degreased using synthetic thinner to ensure good bonding of the future adhesive vinyl decoration. 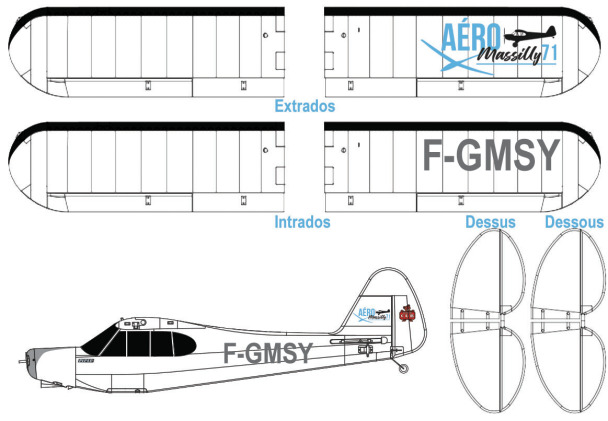 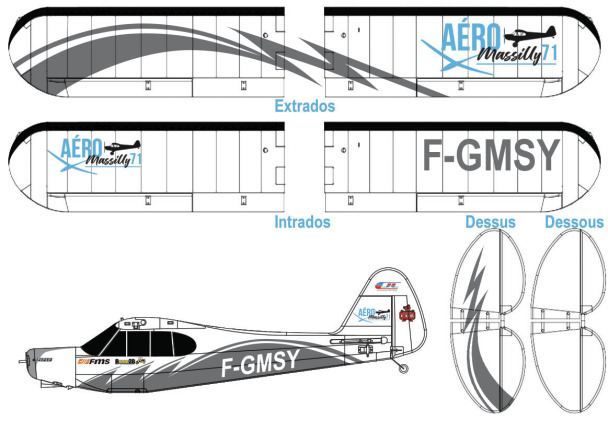 From views taken from the manual and from internet, the profile views, the upper surface and the lower surface were prepared to define the decor. The "mandatory" elements have been installed, namely the club's logo and registrations numbers.

F-GMSY is a fictitious registration, no aircraft registered in the French aircraft  register seems to use it. MSY refers to Massilly (MasSillY).

Then, it was by viewing many pictures of Piper Cub, Super Cub, and other Carbon Cubs and derivative planes that I found the general idea of the decor. First, I imagined it in gray, like the decor colors of the original FMS kit.

In addition to the basic decor, I added the "Piper Cub" logo with its teddy bear, so emblematic of these planes, as well as the FMS logo and that of Beez2B which is the distributor located in Belgium and which supplies stores in France, Benelux and some other countries with FMS products (among others). A JLC-Aviation logo was of course to be expected ...

While discussing it with Didier Cervera, alias "CD Design" who was going to cut of the vinyl stickers, it was found that this gray was too austere and that the plane deserved to be more "flashy". The gray decor has turned red and it is on this project that I decided. 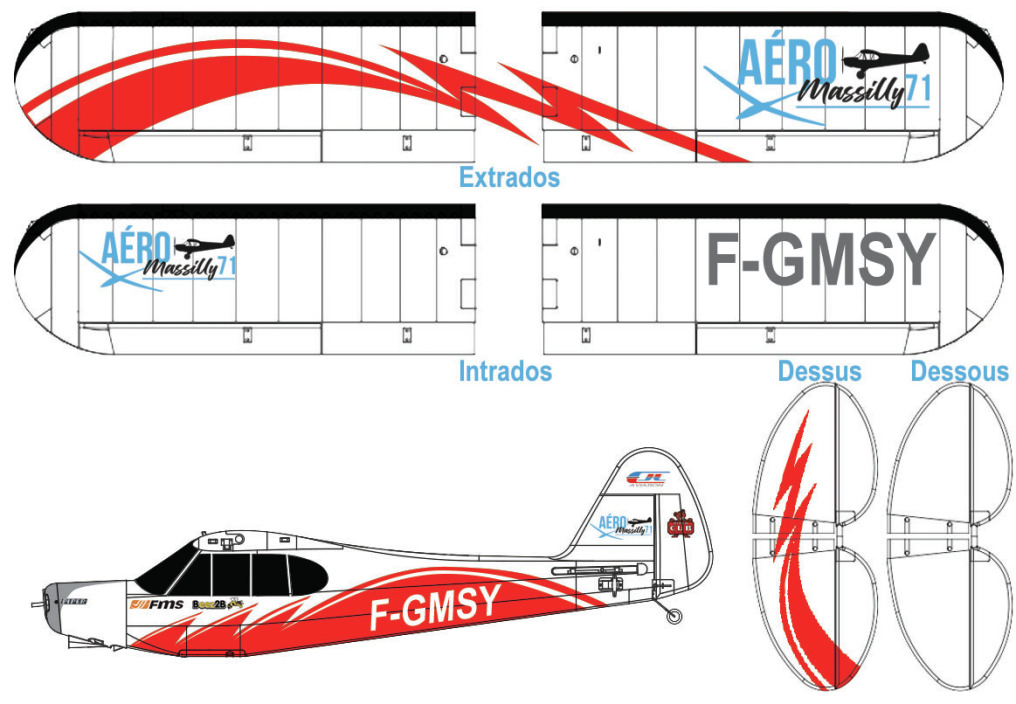 Making of the decor set

It remained to draw all the parts to be made in adhesive vinyl or stickers printed at the exact scale of the aircraft. I am using Adobe Illustrator for this step. It is a sheet almost 2 meters long and 60 cm high that has been prepared. It includes all the elements except the JLC-Aviation logos since I have stickers in stock.

Then, the file was entrusted to CD Design, specialist in the cutting of adhesives for model aircraft builders installed in Replonges, in the Ain department, and very close to my home. (Note that he can ship decor sets anywhere in France, Europe and even worldwide!)

Note: if you do not have the software to prepare the files, CD Design can do this job before cutting. Likewise, if you want a personalized decor and you have no idea, CD Design can design a totally original decor.

CD Design found a metallic red, in an ultra-thin vinyl, light and with a very powerful adhesive power, perfectly suited to installation on EPO foam. The club logos and the gray lower surface registration are in a more standard vinyl. All that remains is to place all these stickers on the airframe ... 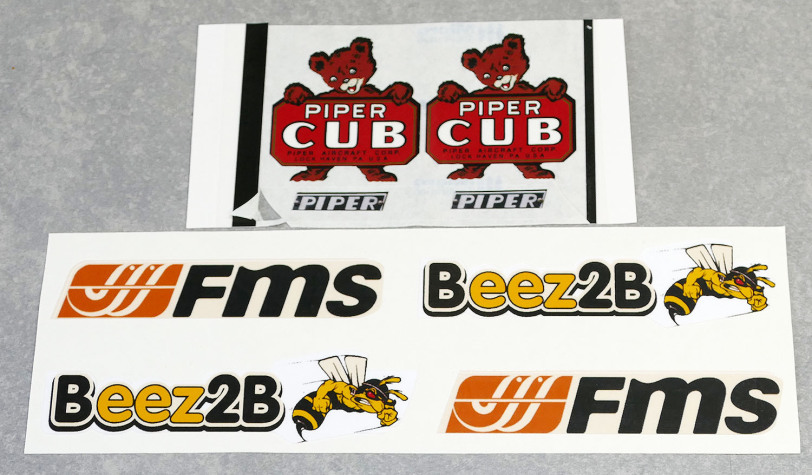 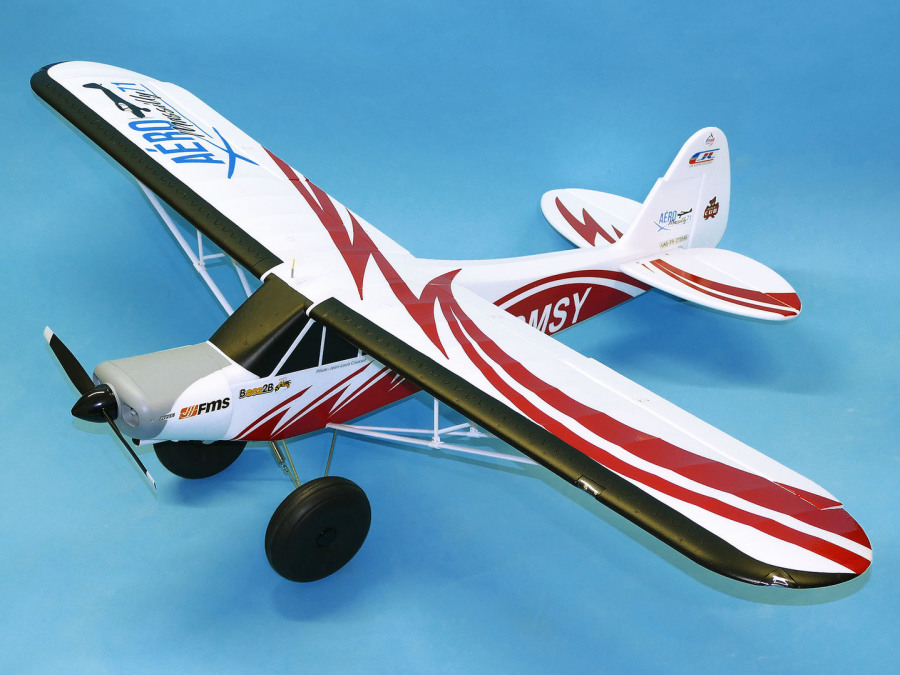 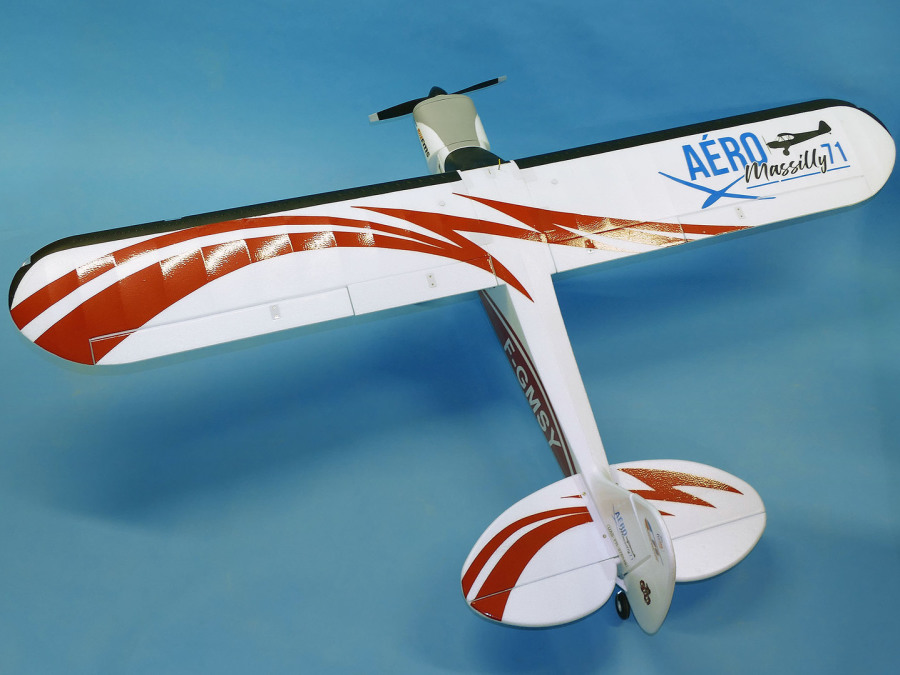 Once the adhesive decor were in place, all that remained was to carry out the final assembly of the PA-18, which was assembled "stock", as planned in the manual. In a few minutes it was ready for the maiden flight!

Below, you have other "studio" photos of the result. 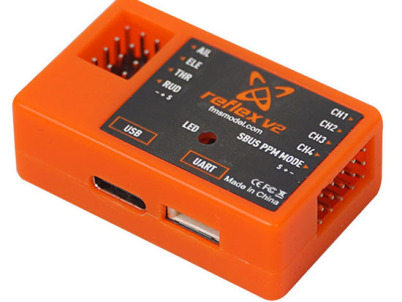 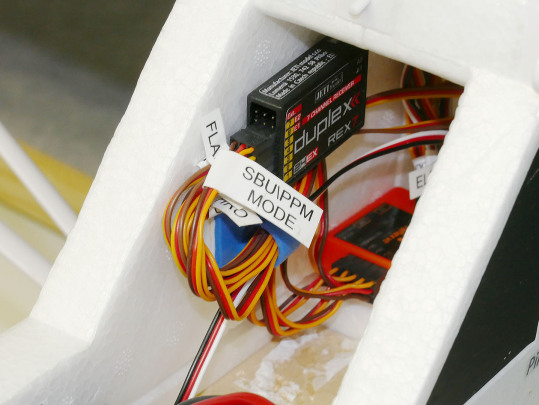 About the "REFLEX 2" module 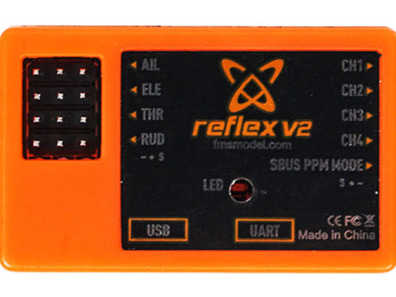 FMS's "Reflex 2" stabilization module is now fitted as standard on the PA-18 kits.

This module connects between the receiver and the aileron, elevator and rudder servos and it also takes care of the throttle setting.

Controlled by an auxiliary channel which is assigned to a 3-position switch, it offers three operating modes:

Version 2 of the Reflex module has the particularity of being reprogrammable. Warning: you cannot access the programming parameters to adjust the gains or the mixes ... You can only insert the parameters of another FMS model into it, using software that you download from the FMS website, and the USB cable which is supplied to be connected between the PC and the module. So, if you have an FMS aircraft not equipped with Reflex, you can transfer the Reflex 2 and adapt it to this model.

On the PA-18, the original installation of the Reflex 2 is on the battery support plate and I found it inconvenient for the correct installation of the battery. I took it off and repositioned it further back, scrupulously keeping its original orientation. Thus, my battery sits flat and I can also use packs with a higher capacity than what is suggested. 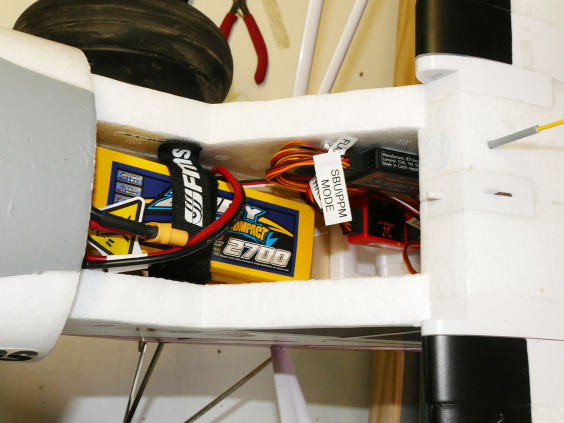 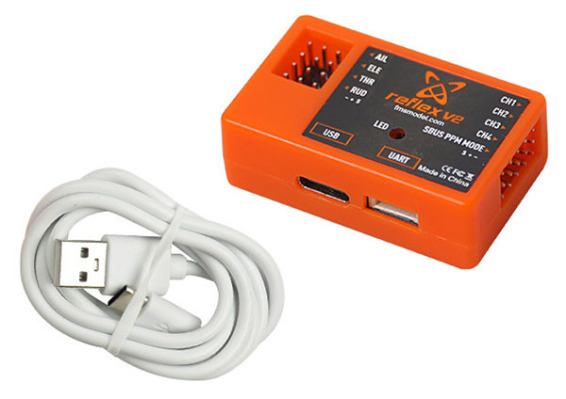 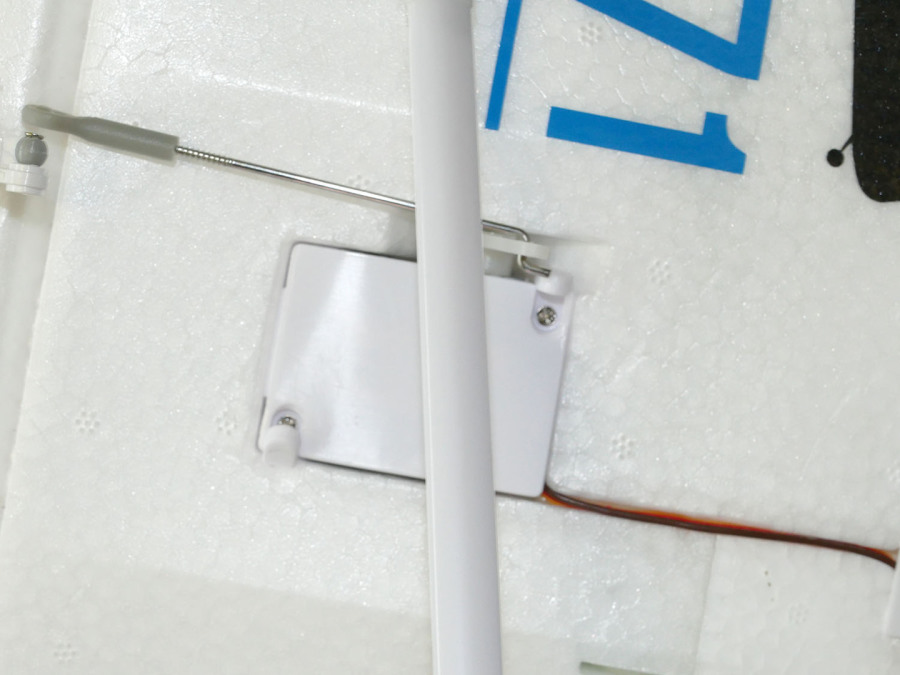 My first FMS PA-18 did not have a Reflex module, I had rewired the wing servos to use one channel per aileron servo, which allowed to adjust the aileron differential.

This time, with the Reflex module not allowing separate management of the two ailerons, I kept the original assembly and therefore, I only have one channel for the two ailerons.

Without differential, the PA-18 is perfectly flyable, I know it from having carried out the maiden flights of several of the PA-18 FMS in my club. However, I find it less comfortable, with a reverse yaw quite present.

So, on the PA-18 F-GMSY, I extracted the aileron servos, which is easy thanks to the installed cases that can be opened. This allows to shift one notch the neutral of the servo arm. I would have moved two notches, but the linkage would then be too short. Once the servo is re-installed, it remains to adjust the length of the  linkage. This gives a little aileron differential, which reduces the reverse yaw a little. The two photos show the operation. 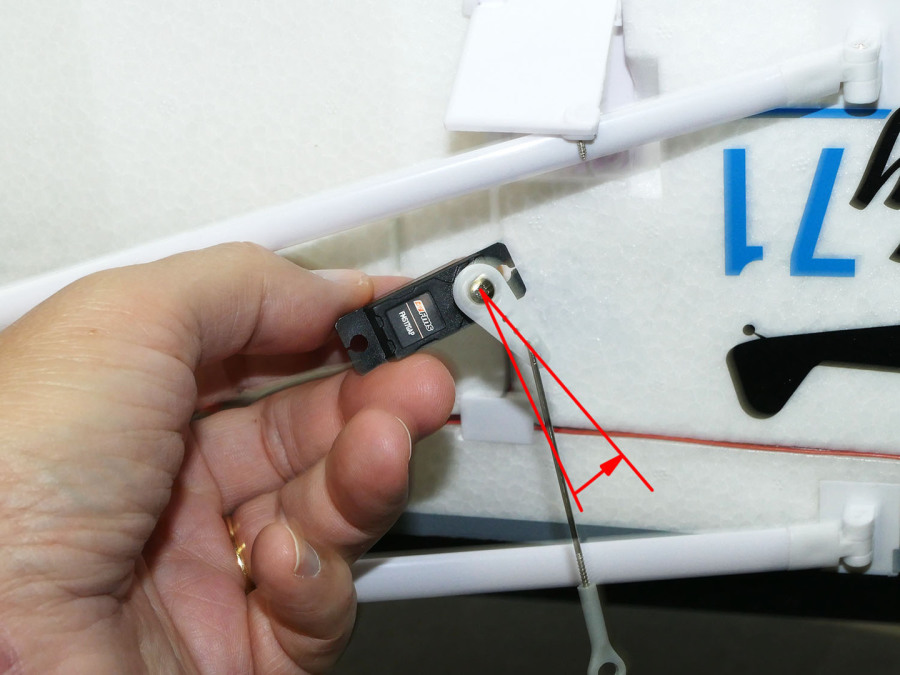 I also shifted the balls of the elevator and rudder horns in order to obtain large deflections when I wanted to move hard the Piper… But I plan a dual rate switch to be able to fly cool and to give the sticks to friends unaccustomed to very maneuverable aircrafts.

By reading the test of my first PA-18, I see that I was flying with a quite rear center of gravity setting : 90 mm from the leading edge. The first flights of this one were made without checking the C.G., since the more than 10 PA-18s of my club are flying without modifying anything and with all sizes of battery packs, from 2500 to 5000 mAh!

Afterwards, I still measured the C.G. of my maiden flight with F-GMSY and surprise... it was balanced at 75 mm from the leading edge!

I then moved the pack back to fly centered at least at 80mm. But without the scale tail wheel added on the OO-BTB, reaching 90 mm cannot be done without adding weight at the rear... I will do without, the plane flies well as well.

With so many FMS PA-18s tested and two years flying these planes, I noticed that go-arounds after a touch and go, keeping full flaps, created a very strong nose-up pitch effect, which counteracts well, but requires a quick reaction. Several friends have been tricked and have stalled on this type of maneuver. The effect is less felt with flpas in take-off notch, but it is still present. Flaps at take-off or landing notch, there is no problem up to more than half throttle, the flaps> elevator mix does its job well. The nose-up pitching is sensitive at full throttle.

On the F-GMSY, I therefore wanted to remove this undesirable effect and I added a "Throttle > Elevator" mix. This mix is obtained using a "curve", because it should only start to act when the throttle reach around 60/65%, not before. So, from 65% throttle, the mix adds a bit of nose-down elevator, with a rate which depends on the position of the flaps: Nothing flaps retracted, slight with flaps on the take-off notch and more accentuated on the landing notch.

And this works very well ! The full flap go-around with full throttle keep now a level flight, without the aircraft pitching up. It is more comfort and more safety. The settings ​​are in the table below. 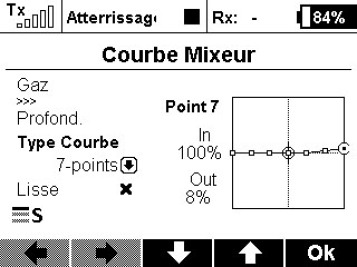 Despite the freezing fog, a temperature of -4°C, a visibility of 100 meters and a ceiling of 15 meters, the PA-18 F-GMSY made his roll-out on the Aéro Massilly 71 flying field and made 4 flights in a limited volume, at very low speed. The start of a great career!